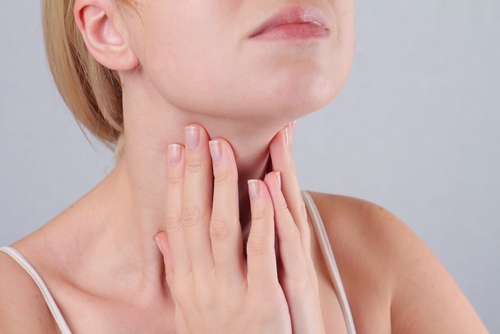 Thyroid disorders are conditions that affect the thyroid gland, a butterfly-shaped gland in the front of the neck. The thyroid has important roles to regulate numerous metabolic processes throughout the body. Different types of thyroid disorders affect either its structure or function.

The thyroid gland is located below the Adam’s apple wrapped around the trachea (windpipe). A thin area of tissue in the gland’s middle, known as the isthmus, joins the two thyroid lobes on each side. The thyroid uses iodine to produce vital hormones. Thyroxine, also known as T4, is the primary hormone produced by the gland. After delivery via the bloodstream to the body’s tissues, a small portion of the T4 released from the gland is converted to triiodothyronine (T3), which is the most active hormone.

Since the thyroid gland is controlled by the pituitary gland and hypothalamus, disorders of these tissues can also affect thyroid function and cause thyroid problems.

There are several types of thyroid disorders.

Hypothyroidism results from the thyroid gland producing an insufficient amount of thyroid hormone. It can develop from problems within the thyroid gland, pituitary gland, or hypothalamus. Symptoms can include:

Hyperthyroidism describes excessive production of thyroid hormone, a less common condition than hypothyroidism. Symptoms usually relate to increased metabolism. In mild cases, there may not be apparent symptoms. Symptoms and signs of hyperthyroidism can include:

Some of the most common causes of hyperthyroidism are:

A goiter simply describes enlargement of the thyroid gland, regardless of cause. A goiter is not a specific disease per se. A goiter may be associated with hypothyroidism, hyperthyroidism, or normal thyroid function.

Thyroid cancer is far more common among adult women than men or youth. About 2/3 of cases occur in people under age 55. There are different kinds of thyroid cancer, depending upon the specific cell type within the thyroid that has become cancerous. Most cases of thyroid cancer have a good prognosis and high survival rates, especially when diagnosed in its early stages.

Blood tests are typically done to measure levels of thyroid hormones and TSH. Blood tests to identify antibodies against thyroid tissue may also be ordered by your doctor, such as titers of anti-thyroglobulin, anti-thyroperoxidase, or TSH receptor stimulating antibodies.

Imaging tests are commonly used when thyroid nodules or enlargement are present. Ultrasound can visualize the consistency of the tissue within the gland and can often reveal cysts or calcifications. Ultrasound examination cannot distinguish a benign from a malignant process.

Thyroid scans using radioactive iodine are often performed to evaluate the function of thyroid nodules. The thyroid is the only location in the body that takes up iodine, so when radioactively labeled iodine is given, it is taken up by the thyroid gland. An imaging test typically shows uptake of radioactive iodine by normal thyroid tissue. Areas or nodules that are producing excess hormone (referred to as hyperfunctioning) will show an increased uptake of iodine. These are referred to as “hot” nodules or areas. By contrast, so-called “cold” nodules represent areas with decreased iodine uptake. “Cold” nodules do not produce excess hormone and can sometimes represent cancer.

Fine needle aspiration and biopsy are techniques that remove a sample of cells or tissue from the thyroid gland for examination and diagnosis by a pathologist, who is a physician trained in the diagnosis of conditions based on tissue samples. Fine needle aspiration (FNA) uses a long, thin needle to withdraw a sample of cells from the thyroid. FNA can be performed in the doctor’s office. Sometimes, ultrasound imaging is used to guide the FNA procedure. A biopsy is the surgical sampling of a tissue.

Thyroid disorders can be treated by medications or, in some cases, surgery. Treatment will depend on the particular disease of the thyroid.

Surgery can be used to remove a large goiter or a hyperfunctioning nodule within the gland. Surgery is necessary when there is a possibility of thyroid cancer. If the thyroid gland is removed entirely, the individual will need to take synthetic thyroid hormone for life. Thyroid surgery can also be used in Graves’ Disease (subtotal thyroidectomy) and was the treatment of choice prior to RAI therapy and anti-thyroid medications. It is not used much now.