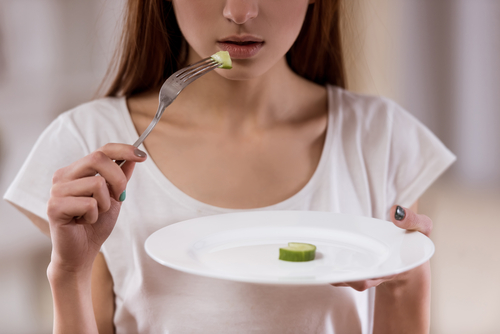 Malnutrition can also be defined as the insufficient, excessive or imbalanced consumption of nutrients. Several different nutrition disorders may develop, depending on which nutrients are lacking or consumed in excess.

Malnutrition may be caused by a number of conditions or circumstances. In many developing countries long-term (chronic) malnutrition is widespread – simply because people do not have enough food to eat.

In more wealthy industrialized nations malnutrition is usually caused by:

If a person does not eat enough food, or if what they eat does not provide them with the nutrients they require for good health, they suffer from malnutrition. Poor diet may be caused by one of several different factors. If the patient develops dysphagia (swallowing difficulties) because of an illness, or when recovering from an illness, they may not be able to consume enough of the right nutrients.

People with mobility problems may suffer from malnutrition simply because they either cannot get out enough to buy foods, or find preparing them too arduous.

Some people may eat properly, but their bodies cannot absorb the nutrients they need for good health. Examples include patients with Crohn’s disease or ulcerative colitis. Such patients may need to have part of the small intestine removed (ileostomy).

Patients who experience serious bouts of diarrhea and/or vomiting may lose vital nutrients and are at higher risk of suffering from malnutrition.

Alcoholism is a chronic (long-term) disease. Individuals who suffer from alcoholism can develop gastritis, or pancreas damage. These problems also seriously undermine the body’s ability to digest food, absorb certain vitamins, and produce hormones which regulate metabolism. Alcohol contains calories, reducing the patient’s feeling of hunger, so he/she consequently may not eat enough proper food to supply the body with essential nutrients.

In poorer nations malnutrition is commonly caused by:

In poorer developing nations food shortages are mainly caused by a lack of technology needed for higher yields found in modern agriculture, such as nitrogen fertilizers, pesticides and irrigation. Food shortages are a significant cause of malnutrition in many parts of the world.

It is ironic that approximately 80% of malnourished children live in developing nations that actually produce food surpluses (Food and Agriculture Organization). Some leading economists say that famine is closely linked to high food prices and problems with food distribution.

Experts say that lack of breastfeeding, especially in the developing world, leads to malnutrition in infants and children. In some parts of the world mothers still believe that bottle feeding is better for the child.

Another reason for lack of breastfeeding, mainly in the developing world, is that mothers abandon it because they do not know how to get their baby to latch on properly, or suffer pain and discomfort.

Children who are severely malnourished typically experience slow behavioral development, even mental retardation may occur. Even when treated, undernutrition may have long-term effects in children, with impairments in mental function and digestive problems persisting – in some cases for the rest of their lives.

Several factors are taken into account to check whether someone is malnourished or at a high risk of malnutrition.

In adults, these include:

You would normally be considered malnourished if you have a BMI of less than 18.5 or you’ve unintentionally lost more than 5% of your body weight during the last three to six months. However, in some cases, doctors may be concerned about malnutrition if you have a BMI between 18.5 and 20.

You may be considered at a high risk of malnutrition if:

A vitamin or mineral deficiency can usually be diagnosed with a blood test.

Diagnosing malnutrition in children involves taking a measurement of their weight and height and comparing it against the expected average height and weight for a child of that age.

Some children will be below average because they’re naturally smaller, but a significant drop below the expected level could indicate a risk of malnutrition.

Blood tests can also be used to measure protein levels in the blood. Low levels of protein may suggest that a child is malnourished.

The type of malnutrition treatment recommended depends mainly on its severity, and whether the patient has an underlying condition/illness which is a contributory factor. If so, that underlying illness/condition needs to be treated or addressed.

When a diagnosis of either malnutrition or malnutrition risk has been made, the healthcare professional (either a doctor or dietician) who is responsible for the patient will devise a targeted care plan.

Aims for treatment will be set out, which should include the treatment for any underlying conditions/illnesses which are contributory factors to the malnutrition.

Typically, treatment will include a feeding program with a specially planned diet, and possibly some additional nutritional supplements.

Severely malnourished patients, or individuals who cannot get sufficient nutrition by eating or drinking may need and should receive artificial nutritional support.

The patient will be closely monitored for progress. Their treatment will be regularly reviewed to make sure their nutritional needs are being met.

A good healthcare professional will discuss eating and drinking with the patient and provide advice regarding healthy food choices. The aim is to make sure the patient is receiving a healthy, nutritious diet.

The doctor or dietitian will work with the patient to make sure enough calories are being consumed from carbohydrates, proteins, fats and diary, as well as vitamins and minerals. If the patient cannot get their nutritional requirements from the food they eat, oral supplements may be needed. An additional 250kcal to 600kcal may be advised.

There are two main types of artificial nutritional support, mainly for patients with severe malnutrition:

The patient will be regularly monitored to check that he/she is receiving the right amount of calories and nutritional needs. This may be adjusted as the patient’s requirements change. Patients receiving artificial nutritional support will be switched over to normal eating as soon as they are able to.