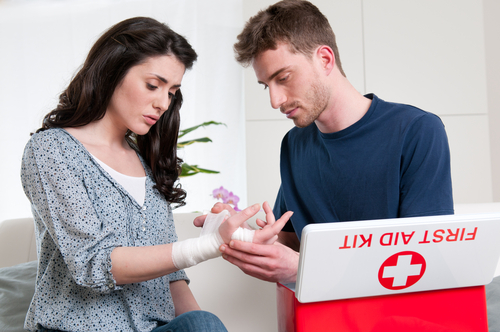 First aid is emergency care or treatment given to an ill or injured person before regular medical aid can be obtained.

If someone is injured you should:

If someone is unconscious and breathing

If a person is unconscious but breathing, and has no other injuries that would stop them being moved, place them in the recovery position until help arrives.

Keep them under observation to ensure they continue to breathe normally, and don’t obstruct their airway.

If someone is unconscious and not breathing

If a person isn’t breathing normally after an incident, call an ambulance and start CPR straight away. Use hands-only CPR if you aren’t trained to perform rescue breaths.

Anaphylaxis (or anaphylactic shock) is a severe allergic reaction that can occur after an insect sting or after eating certain foods. The adverse reaction can be very fast, occurring within seconds or minutes of coming into contact with the substance the person is allergic to (allergen).

During anaphylactic shock, it may be difficult for the person to breathe, as their tongue and throat may swell, obstructing their airway.

Call 911 immediately if you think someone is experiencing anaphylactic shock.

Check if the person is carrying any medication. Some people who know they have severe allergies may carry an adrenaline self-injector, which is a type of pre-loaded syringe. You can either help the person administer their medication or, if you’re trained to do so, give it to them yourself.

After the injection, continue to look after the person until medical help arrives. All casualties who have had an intramuscular or subcutaneous (under the skin) injection of adrenaline must be seen and medically checked by a healthcare professional as soon as possible after the injection has been given.

Make sure they’re comfortable and can breathe as best they can while waiting for medical help to arrive. If they’re conscious, sitting upright is normally the best position for them.

If someone is bleeding heavily, the main aim is to prevent further blood loss and minimise the effects of shock (see below).

If you have disposable gloves, use them to reduce the risk of any infection being passed on. Check that there’s nothing embedded in the wound. If there is, take care not to press down on the object.

Instead, press firmly on either side of the object and build up padding around it before bandaging, to avoid putting pressure on the object itself.

If nothing is embedded:

If a body part, such as a finger, has been severed, place it in a plastic bag or wrap it in cling film and make sure it goes with the casualty to hospital.

If someone has a nosebleed that hasn’t stopped after 20 minutes, go to the nearest hospital.

In certain situations, where bleeding is very severe and from the body’s extremities, such as the head, neck and torso, it may be appropriate to use hemostatic dressings or a tourniquet.

If someone has a burn or scald:

For chemical burns, wear protective gloves, remove any affected clothing, and rinse the burn with cool running water for at least 20 minutes to wash out the chemical. If possible, determine the cause of the injury.

In certain situations where a chemical is regularly handled, a specific chemical antidote may be available to use.

Be careful not to contaminate and injure yourself with the chemical, and wear protective clothing if necessary.

The information below is for choking in adults and children over one year old.

If choking is mild:

If coughing doesn’t work, start back blows (see below).

If choking is severe, the person won’t be able to speak, cry, cough or breathe, and without help they’ll eventually become unconscious.

To help an adult or child over one year old:

Abdominal thrusts shouldn’t be used on babies under one year old, pregnant women or obese people.

To perform abdominal thrusts on a person who is severely choking and isn’t in one of the above groups:

The aim is to get the obstruction out with each chest thrust, rather than necessarily doing all five.

If the obstruction doesn’t clear after three cycles of back blows and chest thrusts, dial 911 to ask for an ambulance, and continue until help arrives.

The person choking should always be seen by a healthcare professional afterwards to check for any injuries or small pieces of the obstruction that remain.

If someone is in difficulty in water, don’t enter the water to help unless it’s absolutely essential.

Once the person is on land, if they’re not breathing, open the airway and give five initial rescue breaths before starting CPR. If you’re alone, perform CPR for one minute before calling for emergency help.

If the person is unconscious but still breathing, put them into the recovery position with their head lower than their body and call an ambulance immediately.

Continue to observe the casualty to ensure they don’t stop breathing or that their airway becomes obstructed.

If someone has had an electric shock, switch off the electrical current at the mains to break the contact between the person and the electrical supply.

If you can’t reach the mains supply:

It can be difficult to tell if a person has a broken bone or a joint, as opposed to a simple muscular injury. If you’re in any doubt, treat the injury as a broken bone.

If the person is unconscious, has difficulty breathing or is bleeding severely, these must be dealt with first, by controlling the bleeding with direct pressure and performing CPR.

If the person is conscious, prevent any further pain or damage by keeping the fracture as still as possible until you get them safely to hospital.

Assess the injury and decide whether the best way to get them to hospital is by ambulance or car. For example, if the pain isn’t too severe, you could transport them to hospital by car. It’s always best to get someone else to drive, so that you can deal with the casualty if they deteriorate – for example, if they lose consciousness as a result of the pain or start to vomit.

Don’t give the casualty anything to eat or drink, because they may need an anaesthetic (numbing medication) when they reach hospital.

Sit the person down and make them comfortable.

If they’re conscious, reassure them and ask them to take a 300mg aspirin tablet to chew slowly (unless you know they shouldn’t take aspirin – for example, if they’re under 16 or allergic to it).

If the person has any medication for angina, such as a spray or tablets, help them to take it. Monitor their vital signs, such as breathing, until help arrives.

If the person deteriorates and becomes unconscious, open their airway, check their breathing and, if necessary, start CPR. Re-alert the emergency services that the casualty is now in cardiac arrest.

Poisoning is potentially life-threatening. Most cases of poisoning happen when a person has swallowed a toxic substance, such as bleach, taken an overdose of a prescription medication, or eaten wild plants and fungi. Alcohol poisoning can cause similar symptoms.

If you think someone has swallowed a poisonous substance, call immediate medical help.

The effects of poisoning depend on the substance swallowed, but can include vomiting, loss of consciousness, pain or a burning sensation. The following advice is important:

If the person becomes unconscious while you’re waiting for help to arrive, check for breathing and, if necessary, perform CPR.

Don’t perform mouth-to-mouth resuscitation if the casualty’s mouth or airway is contaminated with the poison.

Don’t leave them if they’re unconscious because they may roll onto their back, which could cause them to vomit. The vomit could then enter their lungs and make them choke.

If the casualty is conscious and breathing normally, put them into the recovery position and continue to monitor their conscious state and breathing.

In the case of a serious injury or illness, it’s important to look out for signs of shock (see below).

Shock is a life-threatening condition that occurs when the circulatory system fails to provide enough oxygenated blood to the body and, as a result, deprives the vital organs of oxygen. This is usually due to severe blood loss, but it can also occur after severe burns, severe vomiting, a heart attack, bacterial infection or a severe allergic reaction (anaphylaxis).

The type of shock described here isn’t the same as the emotional response of feeling shocked, which can also occur after an accident.

Signs of shock include:

Seek medical help immediately if you notice that someone has any of the above signs of shock. If they do, you should:

The FAST guide is the most important thing to remember when dealing with people who have had a stroke. The earlier they receive treatment, the better. Call for emergency medical help straight away.

If you think a person has had a stroke, use the FAST guide:

Call for emergency help if a person has any of these symptoms.