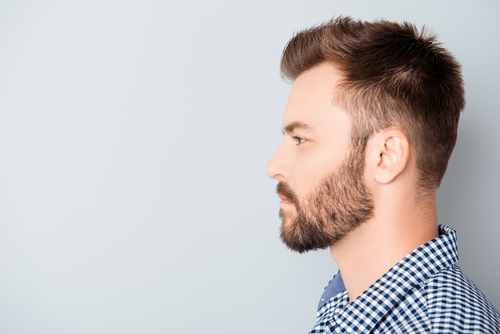 In teenage boys, facial hair grows thick and darkens because of the effect of testosterone, the male sex hormone.

When boys enter puberty, their testicles begin producing more testosterone. It’s responsible for many of the changes your body goes through. Getting a beard is one of the changes brought about by this hormone. Girls also have hair that grows on their face, but it’s very faint and usually not noticeable until later in life.

Getting hair on your face is one of the last changes of puberty. On average, boys start noticing hair on their face around age 15 or 16. Exactly when the changes of puberty occur can vary a lot. And how fast the changes occur can also vary. That means some boys start growing a beard very early in their teenage years. Others don’t notice a beard starting until they are much older.

The amount of facial hair varies from one guy to the next. That’s because the amount of hair you have, how dark or light it is, and where it grows on your face, is largely controlled by your genes. That doesn’t mean your beard will necessarily look like your dad’s. What it does mean is that somewhere in your family tree, there are men whose beards followed a pattern like yours.

And it may take a while before you know what that pattern is. Usually, though, by the time a guy is in his late teens or early 20s, the pattern of his beard is set.

When to start shaving

How often should I shave?

That depends on how fast your beard grows and how dark it is. For some guys, shaving once every few weeks is fine at first. Other guys shave maybe once every three or four days. As you get older and your beard gets heavier, you’ll feel the need to shave a little more often. Your beard won’t get thicker by shaving more. So you should base your decision on how often to shave on how you want to look.

Should I use an electric razor or a razor blade to shave?

That’s up to you. Some guys prefer an electric razor because it’s easier and usually faster to use. All you need to do is press the shaver to your face and move it around in the area you want to shave. On the other hand, a razor blade will give you a closer and cleaner shave.