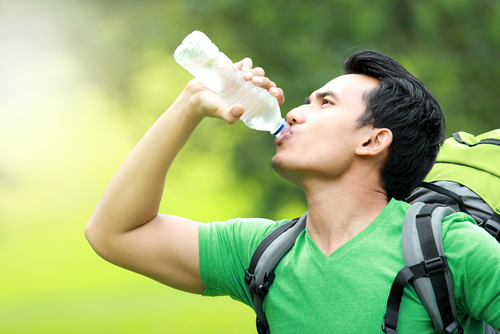 Thirst is the craving for fluids, resulting in the basic instinct of animals to drink. It is an essential mechanism involved in fluid balance. It arises from a lack of fluids or an increase in the concentration of certain osmolites, such as salt. If the water volume of the body falls below a certain threshold or the osmolite concentration becomes too high, the brain signals thirst.

However, feeling thirsty all the time and for no good reason isn’t normal and should be investigated by your doctor. Excessive and persistent thirst (known as polydipsia) could be a sign of an underlying problem such as diabetes.

You will usually feel thirsty because you’re not drinking the amount of fluid your body needs. This may be because you’ve been sweating heavily or you’ve lost fluid because you have diarrhea and are vomiting.

You can soon quench your thirst and restore the fluid balance in your body by having a drink and ensuring you remain well hydrated.

It’s particularly important to stay well hydrated during hot weather, while exercising and while you’re unwell with vomiting and diarrhoea.

In some cases, thirst may be caused by something as simple as a recent meal or snack. Eating salty or spicy foods can cause you to suddenly feel thirsty.

If you feel thirsty all the time, it could be a sign of diabetes – particularly if you also have other symptoms such as needing to urinate frequently, extreme tiredness (fatigue) and unexplained weight loss.

Diabetes is a lifelong condition that makes it difficult to control the level of sugar (glucose) in your blood. The high levels of glucose can mean your kidneys need to produce more urine to help pass the glucose out of your body. This can make you feel thirsty because your brain is telling you to drink more to make up for the fluids you’ve lost.

If you feel thirsty all the time and have other symptoms, your doctor will probably carry out a blood glucose test to see whether you have diabetes.

Feeling thirsty, as well as urinating more often than usual, is a common symptom in pregnancy and usually nothing to worry about.

Very occasionally, these problems can be a sign of gestational diabetes (a type of diabetes that affects women during pregnancy). You should be screened for this as part of your antenatal care if you’re at risk.

Excessive thirst can sometimes be a side effect of certain types of medication, including lithium, certain antipsychotics and diuretics (water tablets).

If you think a particular medicine is causing your thirst, it may be possible to change to a different medicine or reduce your dose. Speak to your doctor about this.

Other causes of thirst

There are also many other potential causes of severe thirst. These include:

Treatment will depend on the underlying cause of excessive thirst.