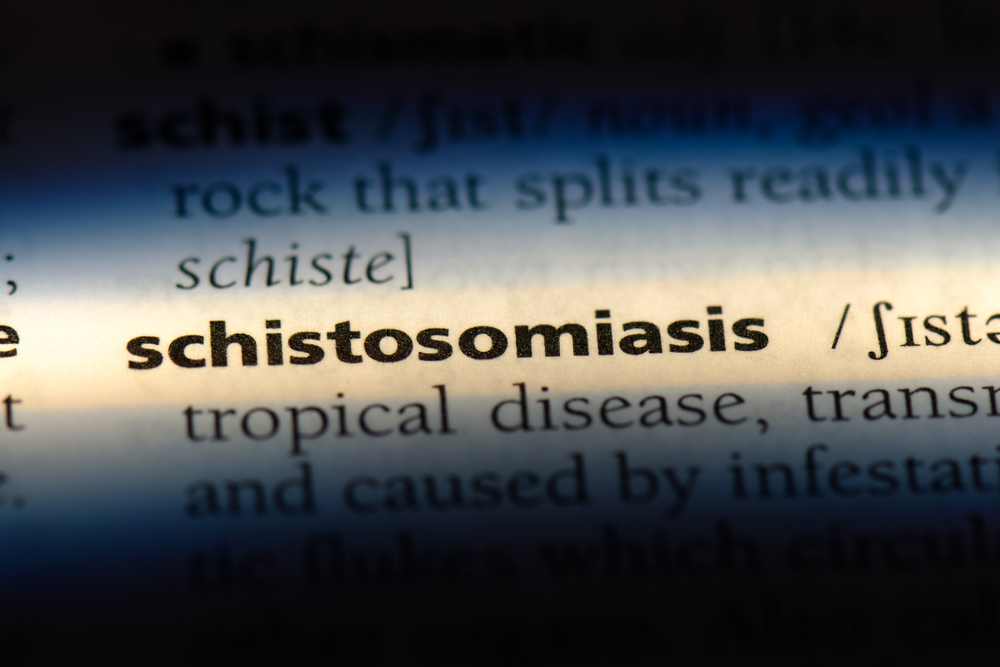 Schistosomiasis is a tropical disease caused by parasitic worms called schistosomes. These worms are also called blood flukes. The disease has affected people for thousands of years, and evidence of the disease has even been found in Egyptian mummies. Schistosomiasis is also known as Bilharzia, named after Theodore Bill Hart, who first described the parasites in humans. It is estimated that over 200 million people around the world are infected with these parasites. In Sub- Saharan Africa alone, it causes over 200.000 deaths each year. Schistosomes have a complex and fascinating life cycle involving humans, snails, and freshwaters such as lakes, ponds, and reservoirs.

Infected humans pass just some eggs through their feces or urine into freshwater. These eggs hatch into larvae and infect certain species of snails. After a period of development of the snail, they will be released back into the water in the form called cercaria. They swim and penetrate the skin of a human. They can enter the body of someone using the pool. Once in the body, they find their way through the lungs and into the liver, where they grow into adult worms. They migrate to the blood vessels surrounding specific organs where they can live for many years. Some species of Schistosoma like to live around the bowel, whereas other species prefer to live around the bladder. These adults can lay thousands of eggs a day. Some of the eggs find their way back to the water through urine and feces and start the life cycle again, although some eggs get into the organs.

Schistosomiasis can cause both short-term and long-term diseases.

When cercaria penetrates the skin, some people develop itchy rashes called swimmer’s itch or fisherman’s itch. Others develop a syndrome called acute schistosomiasis, which is also called Katayama fever. This occurs about four weeks after being exposed to the parasites for the first time. It usually presents with excitement and a range of other symptoms such as diarrhea, rash, and respiratory symptoms. This is often self-limiting.

The long-term effects of schistosomiasis are more severe and occur as a result of the eggs that are trapped in various organs. The trapped eggs can lead to tissue changes characterized by granuloma formation with a lot of inflammation around them. In the bladder, this can lead to the hardening of the bladder wall obstruction and can even result in a type of bladder cancer. This can present symptoms such as blood in the urine.

Intestinal schistosomiasis can lead to symptoms such as abdominal pain, diarrhea, and blood in the stool.

In the liver, the eggs can cause scarring of the tissues around the liver’s vessels, obstructing them and causing enlargement of the liver and spleen. Other organs that can be affected are the lungs, genital organs, and even the brain. Chronic infection, especially to children, can lead to anemia.

Five main types of schistosomes are responsible for most human diseases. They differ in distribution, the kind of condition they cause and the nature of snails that they live in

These affect mainly the bowel and liver.

The disease can be diagnosed from the urine and stool using special techniques or by tissue biopsy and examining it under the microscope.

There are blood tests that can look for antibodies against parasites.

There is no vaccine against schistosomiasis yet, but there is an effective medication to treat the disease. It usually works by killing the adult worm that the eggs are no longer produced. Recovery of organs depends on the type and extent of damage that has taken place.

Preventing the disease can occur at various points in the worm’s life cycle. The spread of schistosomiasis needs to infect humans who contaminate the water, a snail, and subsequent contact with another human who uses the contaminated water. The disease can be eliminated to humans using medication. In areas with a lot of conditions, entire communities or targeted at-risk groups can be treated with medications to reduce the incidence of disease. Large-scale drug treatment has been an effective way to control schistosomiasis. Another is to reduce the contamination of water. This involves activities such as educating people on proper sanitation and providing necessary facilities such as toilets. Some countries try to eliminate snails by using chemicals or biological control methods. Their effectiveness has been variable. Another way to prevent the disease is by reducing contact with contaminated water.